On Monday, May 13th, we had visited Kukke Subramanya Temple, before our 12-hour journey back home. The temple had a lot of chariot constructions going on due to the upcoming festival that was going to take place at the temple.

History of the Temple:-

According to the beliefs, after killing the demon rulers Tharaka, Shurapadmasura and their followers in a war, Lord Shanmukha reached Kumara Parvatha with his brother Ganesha and others. He was received by Indra and his followers. Indra being very happy prayed Lord Kumara Swamy to accept and marry his daughter Devasena for which the Lord readily agreed. The divine marriage took place on Margashira shudha shashti at Kumara Parvatha. Gods like Brahma, Vishnu, Rudra and many other deities assembled for the marriage and coronation ceremony of Shanmukha for which waters of several holy rivers were brought. With these waters of Mahabhisheka fell down to form a river which was later known by the popular name Kumaradhara. The great Shiva Bhakta and Serpent king Vasuki was performing tapas for years in the Biladwara caves of Kukke Subrahmanya to avoid the attack of Garuda. Following Lord Shiva’s assurance, Shanmuka gave darshan to Vasuki and blessed him that he would stay with his parama bhakta in this place forever. Hence the poojas offered to Vasuki or Nagaraja are nothing but the poojas to Lord Subrahmanya. 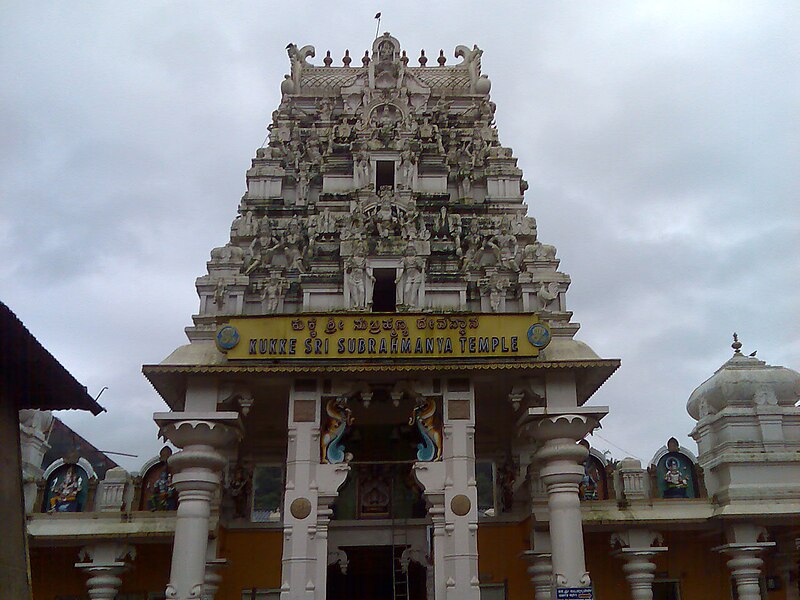 The ambiance of the temple is extremely serene. I personally liked the semi-cool climate that presided around the temple. The temple also offered us big laddus to munch on as offerings from God, so that was something that I didn’t expect.

After that visit, we started our 12-hour journey back home. As we were moving downhill, we saw a lot of landscapes that were wallpaper worthy to take pictures of.

I really enjoyed this trip as it had a variation of mythology and history of places combined for every place that we visited. It was a numinous experience and the feeling of dérive never fades away, even after the trip ended.