For this trip, my grandfather had planned to spend time with me by showing some historical places in our native as well as meet a famous agriculturalist. On our way there, we had stopped by at Aurobindo Ashram, to learn more about the eye program that they have, which helps in curing a person’s eyesight to perfect 20/20 vision.

The ashram grew out of a small community of disciples who had gathered around Sri Aurobindo after he retired from politics and settled in Pondicherry in 1910. On 24 November 1926, after a major spiritual realization, Sri Aurobindo withdrew from public view in order to continue his spiritual work. At this time he handed over the full responsibility for the inner and outer lives of the sadhaks (spiritual aspirants) and the ashram to his spiritual collaborator, “the Mother”, earlier known as Mirra Alfassa. This date is therefore generally known as the founding day of the ashram, though, as Sri Aurobindo himself wrote, it had “less been created than grown around him as its center.”

Sri Aurobindo spent most of his time in writing and meditation. The three or four young men who had followed him to Pondicherry in 1910 lived with him and looked after the household. Otherwise, they were free to do as they wished. The Mother and French writer Paul Richard met Sri Aurobindo in 1914 and proposed that they bring out a monthly review; but after the outbreak of World War I, they were obliged to leave India, and Sri Aurobindo had to do almost all of the work on the review himself, helped a little by the young men who were living with him. In April 1920 the Mother returned to Pondicherry, and soon the community began to take the form of an ashram, more because the sadhaks “desired to entrust their whole inner and outer life to the Mother than from any intention or plan of hers or of Sri Aurobindo.” After the ashram was given formal shape in 1926, it experienced a period of rapid growth, increasing from around 24 at the beginning of 1927 to more than 150 in 1934. The membership leveled off in 1934 owing to a lack of suitable housing.

During these years there was a regular routine. At 6:00 every morning the Mother appeared on the ashram balcony to initiate the day with her blessings. Sadhaks would have woken very early and completed a good portion of the day’s work including meditation and then assembled under the balcony to receive her blessings.

As the ashram grew, many departments came up and were looked after by the sadhaks as part of their sadhana: the offices, library, dining room, book/photograph printing, workshops, sports/playground, art gallery, dispensary/nursing home, farms, dairies, flower gardens, guest houses, laundry, bakery, etc. The heads of the departments met the Mother in the morning and took her blessings and orders. She would meet the sadhaks individually again at 10 am and, in the evening at 5:30 pm, she would conduct meditation and meet the sadhaks.

In addition, four times a year Sri Aurobindo and the Mother used to give public Darshans (spiritual gatherings where the guru bestows blessings) to thousands of devotees gathered to receive grace.

About the Ashram in today’s setting:-

Once confined to a few buildings in one corner of Pondicherry, the ashram’s growth has caused it to expand physically in all directions. Today Ashramites live and work in more than 400 buildings spread throughout the town. The central focus of the community is one group of houses including those in which Sri Aurobindo and the Mother dwelt for most of their lives in Pondicherry. This interconnected block of houses- called “the Ashram main-building”, or more usually just “the Ashram”- surrounds a tree-shaded courtyard, at the center of which lies the flower-covered “Samadhi”. This white marble shrine holds, in two separate chambers, the physical remains of Sri Aurobindo and the Mother.

Today, Pondicherry has become an important destination for spiritual seekers as well as tourists. Thousands of visitors from all over the world come to the ashram. 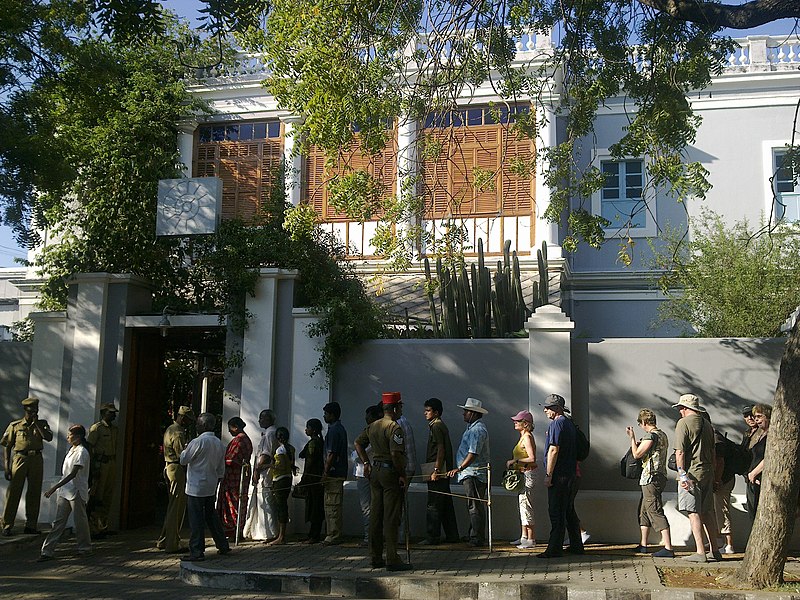 The visiting hours for the visitors are from 8 am to 12 noon and then again from 2 pm to 6 pm.

The Eye program provided by the Ashram:-

The Ashram also provides a voluntary eye program, with exercises that help in curing imperfect eyesight. The new admissions are taken on Thursdays and Saturdays, and the course lasts for about 10 days. After the course, you are expected to practice the exercises on a regular basis to maintain your eyesight. The course also specifies an “eye diet” which you can follow for clear vision.

My experience at the Ashram:-

My Grandfather and I went to the courtyard to observe silence and visit the Samadhi of the Mother. The place was extremely silent, and they have a restriction of switching off your cell phones as well. Most of their communication is done by the use of sign language to maintain silence throughout the Ashram as a mandatory requirement.

We also visited the bookstore to get some books on the eye program, and for some other multiple subjects. Once we started billing our purchase, the kind lady at the counter had noticed my interest in psychology and we started to make conversation. She told me to look up this famous psychologist named Alok Pandey on Youtube, where his speeches have been recorded. She also told us to make an inquiry as to where he is at the moment so that we might have a chance to visit him.

At the reception, they gave us a map of all their buildings and the location of the dispensary, the place that he is usually located at. When we went to the dispensary, we found out that he was on leave that day and that we couldn’t visit him. Instead, we got his contact info and we were asked to talk to him directly.

Next, we went to the eye clinic to learn more about their voluntary program, which I have already talked about in the above paragraph. Once we received pamphlets and information about the program, we continued our journey to our native and reached there by 1 pm.