Overall, the series is a really good read, and I first came across it in my 8th grade. It follows a girl named Clary, who herself is a Shadowhunter, which is a clan of people who protect the other different varieties of humankind called Downworlders, as well as protect humans from Demons.

The whole series depicts on how she discovers different parts of her life that she had never known about herself. The other characters too, go through similar processes of confrontation.

I really love the series as a whole; and my most favorite one was The City Of Glass, which is the third book in the series. 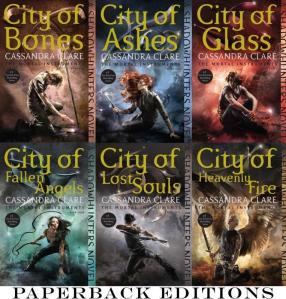