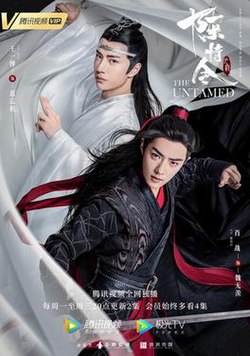 Synopsis:- Wei Ying/Wei Wuxian is known to be a cultivator of the Jiang Clan, who is taken to be very mischievous, kind and carefree. Lan Zhan/Lan Wanji is a person who abides by principles and respects them to the core. Wei Wuxian immediately makes friends with him at the Inter Clan Cloud Recesses Lecture, thinking that he is his equal, when in reality, both of them are like ice and fire. But things change when Wei Wuxian learns demonic cultivation and is said to have “died” by the hands of his brother Jiang Cheng. Sixteen years later, Wei Wuxian reappears, and the story continues, where the duo goes in search of the culprit that is causing deaths till date.

This series was actually recommended by a very good friend of mine, and so I decided to start watching. The story ended with 50 episodes and I love the main cast. All the characters have performed extremely well in their roles and the historic theme is extremely aesthetic to look at.

My favourite characters are Wei Wuxian and Lan Zhan; their friendship is simply extraordinary. I kind of like the role that both of them play in raising Yuan; it was so generous of the both of them to take him in as their own.

*I totally cried during the last five episodes and some of the parts in the flashback tend to be a drag and are soo boring to watch through completely. But there are a lot of interesting scenes and secrets hidden within them.

The Moments of Friendship:-

I would recommend this drama to anyone who loves historical events and suspense throughout, and I’d give the drama 5/5 stars.